09-20-2022 – Nolimit City has been an ever-present name in the online gambling world, with the vast majority of world-class online casinos in every regulated jurisdiction in the world making sure to partner with the provider.

So, even though Nolimit has been in the business for quite some time now, and even though it has created tons of innovative slots, the provider has never created a cluster slot. Well, that is until now. We are delighted to see that Nolimit has announced the release of The Border, an exciting game that features the cluster mechanic and other innovative features.

As you might have guessed by the name of the game, the main theme here resonates around a physical country border. You will find patrol agents as the main characters who are ready to take on cartel gangsters and stop their criminal activities.

Let’s take a closer look at what you can expect when you load The Border in any Nolimit City-powered online casino in the world.

Once you load the reels of The Border, you will see a large game grid that is full of scorpions, snakes, patrol agents, the military, as well as cartel gangsters, which is what you would expect from a slot of this theme. You will get the opportunity to be in a land where criminal activity is present and police agents try their best to stop it. 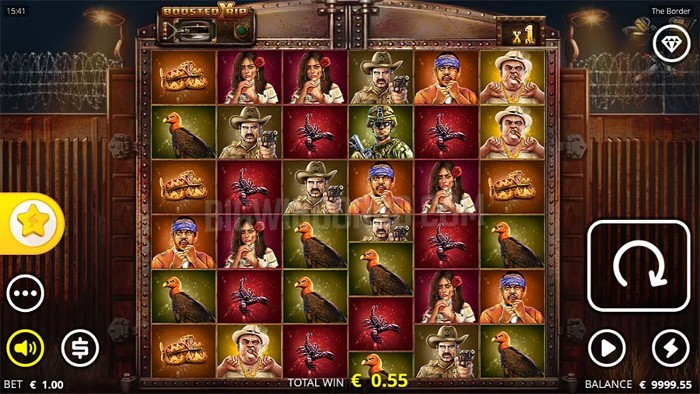 Next, as mentioned above, The Border features the so popular cluster pays element, which means that you need to match at least five symbols in a group to secure a payout. These symbols can glue together vertically or horizontally to secure a winning combination.

After you have created the cluster, all winning symbols in The Border will disappear, with new ones taking their place immediately. This is a mechanic that can help you form unlimited winning combinations.

Moreover, you will also find the xWays mechanic in this game, and it is a standard feature among Nolimit City games. This mechanic, when triggered, will turn regular symbols into a bigger-size ones, and getting more xWays symbols will get you enough icons to form a matching cluster.

The xSplit feature is another one to note for The Border and it split symbols to the left, doubling their size and converting itself into a Wild. This feature can also split a Scatter, so you will get to enjoy two of those on the reels at the same time.

Excitement About the New Release

Emil Svard, who is the Co-Founder and Product Owner of Nolimit City stated that this is a game that is a reflection of the divide between two worlds. He continues by noting that the company has done its best and is delighted to announce its first game featuring the cluster pays mechanic.

Svard finishes his statement by saying that the cluster pays mechanic is sure to keep players engaged all the time, so there is plenty to look forward to.

What Other Features Does The Border Have?

The xNudge Cluster Wild is also something you need to look after in the game. This is an icon that can nudge if it is part of a winning cluster. It will nudge towards the winning symbols and get you a win multiplier.

This is a mechanic that will go on as long as there are consecutive symbols in a win. Moreover, if the xSplit symbol splits the xNudge Cluster wild, it will add to its multiplier on top of the win already secured.

Finally, the xBomb Wild is the last one players can enjoy in The Border. It will replace all symbols in this Nolimit slot, except the Scatter, whereas an exploding xBomb Wild will remove adjacent symbols and increase the win multiplier.